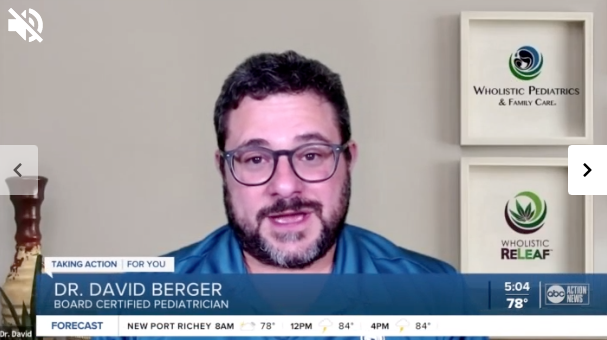 TAMPA, Fla. — “Certainly through COVID it became very much a standard of care,” said Dr. David Berger, Board Certified Pediatrician at Wholistic Pediatrics and Family Care.

Over the past year, telehealth is something many people have taken advantage of.

“I have a lot of patients especially in my pediatric practice, kids with epilepsy, kids with cerebral palsy, kids with autism, who don’t live real close to us. I have people around the state from the Panhandle and South Florida,” said Berger.

“She can barely move, she’s in a wheelchair. She’s bound to a wheelchair. It’s really hard to get her ready to get anywhere,” said Leonardo Palacios, whose mother has been using telehealth services.

The executive order allowed patients like Palacios’s 90-year-old mother to see a doctor from the comfort of her own home.https://63786a9625fb0b213b9076eebc391ede.safeframe.googlesyndication.com/safeframe/1-0-38/html/container.html

“It’s about a two-hour process to get her ready just to get her, to get in a car and then have the unpleasant experience or a car ride because she gets panicky. She has dementia,” said Palacios.

“Or just getting some of our kids who are in wheelchairs and adults as well, into a medical van, into the transport. I mean it’s an hours-long process, there’s expenses there. Sometimes it’s just not feasible. Medical care is going to be compromised for patients who can’t just easily get to the office,” said Berger.

After being renewed several times, the executive order relaxing telehealth rules expired a few weeks ago.

“I have patients who are now telling me I don’t know how I’m going to be able to get down there to do an exam,” said Berger.

Palacios says it’s a big disappointment for his mother, and now an added challenge to have to go back to the doctor in person.

“She needs to be able to rest from her pain and have some relief. I don’t understand, what good does it do to go back to going in office,” said Palacios.

The changes have some patients frustrated in the Tampa Bay area and across the state as they now try to seek medical care.

“It’s incredibly frustrating. You know something is helping a child or an adult when nothing else was and now you have parents calling you scared because they don’t know if they’re going to be able to take care of this,” said Berger.

Some physician groups are hoping to permanently expand telehealth regulations in Florida, but any potential changes will have to wait until the next legislative session.

“We’ve had this work successfully so whatever concerns there were when the legislators carved out to not allow it in 2016, clearly the sky has not fallen. Medical care has not been compromised. Patients have been doing well. There is no problem here,” said Berger.