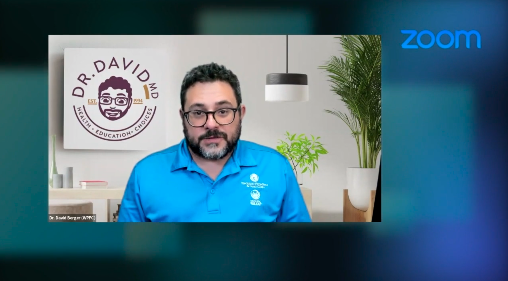 “It is a respiratory virus that can cause cold-like symptoms,” said Dr. Michelle Blanco with the USF Department of Pediatrics.

“This seems to be an unusually hard year for RSV,” he said.

Most commonly affecting kids five and under, symptoms can include fever, congestion, cough, and decreased energy.

Dr. Juan Dumois, who works in Pediatric Infectious Diseases at John Hopkins All Children’s Hospital, said a tell-tale sign could be found in the mouth.

“If a child is starting to have a bluish or grayish discoloration around their lips, that suggests they’re not getting enough oxygen, and that warrants a visit to the emergency room,” he said.

Dr. David Berger, a board-certified pediatrician at Wholistic Pediatrics and Family Care, said other signs can be noticeable, too.

“We should be looking for signs of respiratory distress. So these would be things like fast breathing, labored breathing,” Dr. Berger said. “Children under the age of two are most a risk of having serious complications.”

Pediatric ICUs nationwide are getting filled with RSV cases.

According to the Centers for Disease Control and Prevention, cases across the country are at a two-year high.

“It’s a bigger problem this year than it has been for a while,” Teng said.

“We are seeing higher levels of RSV in our ERs and higher rates of hospitalization in children,” Blanco said.

Doctors fear the spread could get worse with holiday gatherings right around the corner. While RSV cases aren’t uncommon, what we’re seeing right now is.

“The timing of it is one of the things that’s unusual,” Berger said.

Doctors usually see a spike in RSV cases between December and February, but never to this magnitude.

“We don’t really know why it’s shifted earlier, but it is causing a significant number of problems,” Teng said.

Experts’ best theory behind this unprecedented surge is the sudden lack of public health measures like mask-wearing after two years of precautions during the height of the COVID-19 pandemic.

“There was a significant decrease in cases of RSV. Fast forward now, where contact precautions have decreased, we’re finding a new population of young children who’ve never been exposed to RSV,” Blanco said.

“Everybody is kind of getting it all at once now. All of the young children are getting it up until five when normally the three and four-year-olds would’ve had it by now,” Berger said.

The good news is most kids get mild RSV cases that parents can manage just fine at home.

“This RSV season, what we recommend for families is taking as many precautions as possible,” Blanco said. “Good hand hygiene is always a good idea. Staying away from sick contacts, teaching children that when they sneeze or cough, they should cover their mouth.”

Doctors stressed that these precautions are important to limit the spread as much as possible during the holidays.